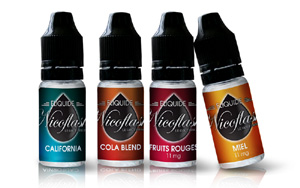 E-liquid, as the name suggests, is a liquid blend intended for use with an electronic cigarette (also known as a vaporizer) used to mime or substitute a "normal" cigarette.
This blend generally comprises two main ingredients:

E-cigarettes or electronic vaporizers heat this blend, usually with an atomizer, an electric resistance which forms aerosol which is inhaled as vapour by the user. Artificial aromas are added to this propylene glycol/vegetable glycerine blend to give the vapour a particular taste.

Discovered approximately 150 years ago, in its purest form propylene glycol (PG) is a viscous, colourless and odourless liquid. It has the exceptional capacity to dissolve organic compounds in water.
It is largely due to this physical-chemical property that propylene glycol is used and has become indispensable to a large number of industries including cosmetics, pharmaceuticals, textiles, food processing, etc. As a result, annual production of propylene glycol now exceeds a million tonnes.

Due to the many different uses, different "qualities" of propylene glycol now exist. Of course, the highest quality is required for ingredients used to make medication, as opposed to that required in antifreeze agent! We use USP/EP-quality propylene glycol in our e-liquids, the standard required by European and American pharmacopoeia..

Is propylene glycol toxic - yes or no?

Much less than alcohol and...cannabis ;-). To be clear, propylene glycol is not at all toxic in the doses used in any of the everyday products it is used in. And due to its wide use since the 1950s, this has been confirmed by many studies concerning propylene glycol. It can cause allergies (usually in hypersensitive cases) in very rare cases, but no more than any other chemical compound, including completely natural elements such as lactose or peanut oil.

From a physical-chemical point of view, glycerine closely resembles propylene glycol (a viscous, colourless and odourless liquid); the difference is its slightly sweet flavour. Also called glycerol, glycerine is a chemical compound found in the natural environment, both in many plants and in the human body when fat reserves are metabolised to provide energy.
Widely used in industry, glycerine can by synthesized (i.e. "manufactured" from other chemical elements) or extracted from vegetable oil: this is called vegetable glycerine (VG).

In view of providing the safest liquid possible, our e-liquids are made from organic vegetable glycerine: glycerine obtained from vegetables grown with organic farming methods and using an ECOCERT-certified extraction process. After conducting many tests and receiving significant feedback, we have chosen the ratio 75:25 of propylene glycol to glycerine. We consider this ratio to be the most suited to producing satisfactory vapour whilst allowing optimal use of vape equipment.

The answer is even clearer than that for propylene glycol because glycerine is not toxic at all. Which is not really surprising given that it is a natural compound produced by the body when lipids are metabolised.

Acrolein is a toxic molecule, produced, for example, by the deterioration of fatty acids. It is also found in large quantities in smoke generated by "normal" cigarettes, which is the reason for the well-known pulmonary toxicity of tobacco.
This nasty molecule can also be generated by glycerine exposed to temperatures exceeding 280°C. But e-liquids are heated to temperatures between 60° and 100° in e-cigarettes in good working condition, so there is almost zero risk of finding this compound in vapour. If however, you do remark an acrid smell or taste when using your electronic cigarette, change it or have it checked immediately.

Aromas are added to the GP/VG blend to give e-liquids a particular flavour. There is a wide variety of flavours: blond or brown tobacco, menthol, fruit, etc. In fact, most food flavouring can be added to the blend to create an e-liquid with the corresponding aroma.

All our e-liquids are formulated with natural or synthetic aromas, made in collaboration with recognised food industry allies. 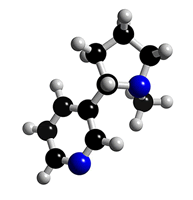 Nicotine is a natural alkaloid (so not everything "natural" is necessarily healthy!) found in the many plants in the Solanaceae family, and particularly in tobacco leaves (Nicotiana tabacum).

Nicotine is toxic. The nicotine molecule is toxic due to its strong affinity with nicotinic acetylcholine receptors: complex proteins situated on the surface of many nerve cells whose vital role is to drive the nerve impulse along the neurons. Nerve cells are abnormally stimulated when exposed to nicotine, causing different results: tachycardia, increased blood pressure, nausea, depression, etc.

The other, and widely known, harmful effect of nicotine is that it generates dependency. As a result, nicotine deprivation causes signs of withdrawal: irritability, nervousness, insomnia, etc.

For all these reasons, nicotine is considered by law as a toxic product, and symbolised by a very suggestive pictogram on packaging of products it is used in (except cigarette packets - makes sense!).
Note that nicotine is not only toxic through inhalation, but also through direct contact, because it penetrates the skin easily and is absorbed in the blood. This explains why all e-liquids containing nicotine must be packaged in a bottle with a childproof cap, and of course stored out of their reach.

What is an electronic vaporizer?

The Battery is the vital element in your electronic cigarette as it operates the clearomizer. It can be generally be recharged by connecting it to a computer or electric socket with a USB cable.
Battery power is measured in milliampere/hour (mAH): the higher the number, the more autonomy the battery has. Some batteries can be regulated to determine the voltage sent to the clearomizer. The higher the voltage, measured in volts, the more vapour will be produced.

The atomizer (or clearomizer or cartomizer) is a tank containing liquid with a charged resistance for heating the tank and a mouthpiece (also called a Drip Tip), usually screwed onto the vaporizer.

Dependency on nicotine is a drug addiction. Nicotine generates true dependency, both psychological (the gesture of smoking) and physical. For the average smoker, as we have just shown, this dependency is essentially caused by nicotine. There is one simple way to satisfy this dependency: by smoking. The real problem is that when smoking, the nicotine dose demanded by the body is not the only substance absorbed. Many other substances (over 4,000!) directly generated by the combustion of tobacco - some of which are very toxic - have catastrophic effects on health: respiratory problems, risk of cancer, heart problems, etc.

By proposing e-liquids with nicotine, manufacturers offer tobacco consumers a chance to provide their body with the required dose of nicotine, while avoided exposure to other toxic products generated by the combustion of a cigarette. As a result, the electronic cigarette can unofficially be considered "the lesser evil". It can be used to satisfy a specific nicotine dependency, with the added advantage that the smoker still has the gesture and the sensation of inhaling smoke.

However, this "substitutive" action is not legally recognised by authorities. This is partly due to the relatively recent existence of the e-cigarette, but also to the weight of lobbying by the tobacco and pharmaceutical industries. One thing is certain, despite explanations remaining unclear for the above-mentioned reasons: for the same dose of nicotine, the electronic vaporizer is less toxic than a "normal" cigarette. This has been recognised by many specialists.

Aiming to satisfy all types of consumers: heavy and occasional smokers, most e-liquid manufacturers offer a range of blends with different nicotine content. As a result of these different strengths, all smokers, however dependent they are, can immediately find the satisfying dose.

Ideally smokers manage to gradually decrease their required nicotine dose, until they are completely "disintoxicated". At that point, the e-cigarette could be considered a real solution to tobacco addition.

Like many manufacturers, our e-liquid range includes different nicotine contents: 16 mg, 11 mg, 6 mg and 0 mg. In the last case, the blend contains no trace of nicotine and is therefore not a potentially addictive product at all; as a result, the pictogram symbolising a toxic product does not feature on the labels.